"I ran across your page & am very impressed. I can tell you have done alot of
work on it.  Here's a pict of my newly restored 69 440 6pk auto Road Runner coupe." 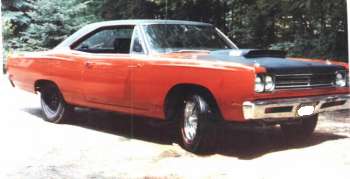 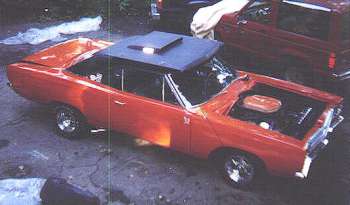 "I had the exact same color & combo car new in 69 & sold it in 71. The guy that bought it, a friend, forgot to pin the hood & lost it under a gravel truck. He put a stock roof & 4bbl on it & sold it as a daily driver, lost it then.
I had just had my 6th back surgery back in 93 & my daughters boy friend came in with this "Great perfect car" I was on pain pills so it could have been a model in the pictures or anything, & I bought it for $5000."

After I got out & recovered, I tried to start the car- BANG- the motor backfired & sent the oil breathers thru the air. After I checked it out I found it's motor was junk, the 4spd didn't work & it had cancer all under the
doors on both sides.  The "boy friend " left & so did my bucks & info on the car. I had to do
everything to it!" 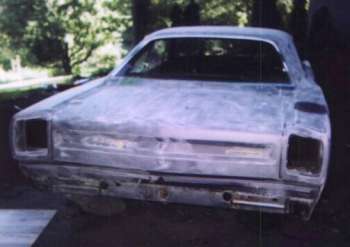 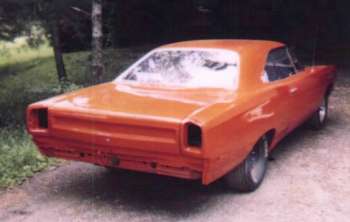 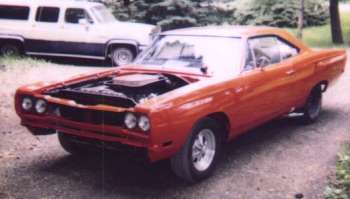 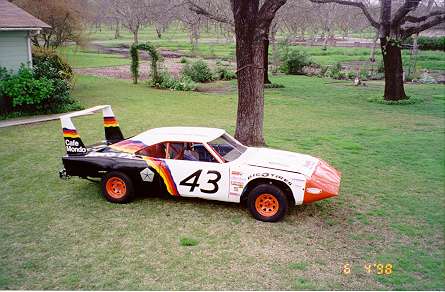 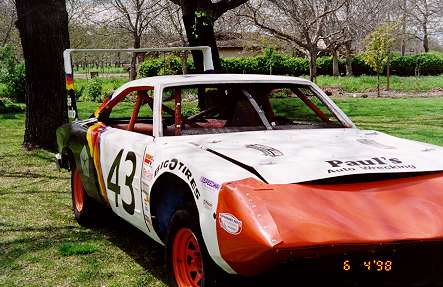 Above and below are photos of one visitor's 1969 Dodge Daytona clone.   Unfortunately I do not have his name. 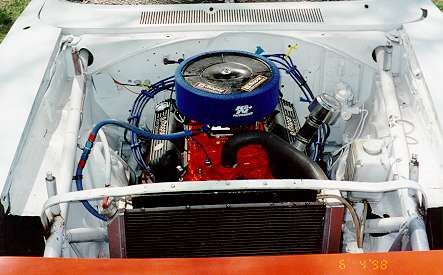 "Hi Lee,
I e-mailed you last year re: my 70 petty superbird clone. This year I went with a daytona clone in ma mopar's colors. I would love to show it to other Mopar lovers on the net but don't have a page. Any way about it. It has a 340 .030 over with forged trw replacement pistons 10.5:1 but deck has been shaven .10. Steel crank stock rods. j-heads with 2.02 valves double springs and MP oval track cam for 1/4 mile banked oval. we have to run a 2-bbl. so I have a holley 500. 727 tranny 8 3/4 suregrip. All work done by me and a friend. I cut up a rusted beaten and stripped 68 body with various doors and fenders which were all unuseable. I made the nose from rolled plastic and the wing fromsheet metal wrapped around 1x1 tubing. I run in the pure stock division and am the only mopar on the track. I race in Chico, Ca at Paul McMahan's (last years Stanton sprint cars driver) home track enjoy the photos and share them with the surfers."

This one's not exactly a "visitor's ride", but it's a vehicle of interest, and the photo and a wealth of information about it have been generously provided by William LaDow of Griffith, Indiana.   Check out his great website at http://members.aol.com/WmLaDow/wmladow.html.

Bill writes about the '69 Dodge Daytona shown above...

"Attached is a photo of the Dodge Dow Chemical #99 built by Nichels
Engineering in my home town of Griffith, Indiana. The photo was believed to
be taken in the infield of the Daytona Motorspeedway."

"In the 1960's and into 1970; Nichels Engineering was owned and operated by
Ray Nichels, a member of both the Indianapolis Mechanics Hall of Fame and I
believe the Nascar Hall of Fame."

"His partner in another business (G & N Aircraft) was also a driver for
Nichels and Chrysler for many years; Paul Goldsmith."

"Nichels used to build 25 to 30 Nascar stock cars every year for Chrysler and
some independent drivers. Many of my friend's fathers worked on these cars
for Nichels at his shop in Griffith, Indiana. (35 miles southeast of Chicago)"

"(see Mopar Action Magazine 1998 for article -- Not sure of the issue but the
article in entitled Legends "Paydirt" and it is an article about a driver
named Ernie Derr.)"