Below is George S's amazing F6 green 1969 Dodge Coronet Super Bee.  It's one of 153 built with the 440 "six pack" engine and four speed manual transmission.  It's also equipped with a Dana rear axle with 4.10:1 gear ratio and power steering.  The car is completely "numbers matching".  Unbelievable!

Above is Bill H's 1969 Dodge Charger.   It's equipped with a 383 cubic inch "Magnum" engine, automatic transmission, factory air conditioning and rallye dashboard.  A very nice Charger (as if there's any other kind). 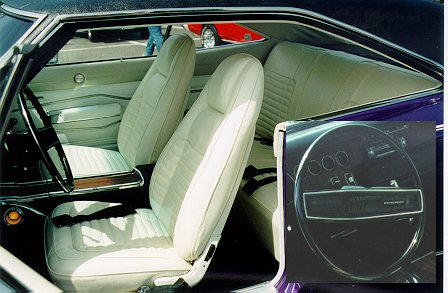 Above and below, Pete's 1970 Dodge Charger R/T.  Originally equipped with a 440 Magnum (four barrel), 4 Speed Pistol Grip shifter, and Dana rear with 4:10 gears (as part of the Super Track Pack option package), the car now wears a "Six Pack" setup.

Pete writes "The car is Plum Crazy Purple with a black vinyl top and white bucket interior. White Longitudinal stripe, rear wing, and road wheels. The white and purple is a great contrast compared to most cars that are purple with black interiors. This car has been thoroughly redone inside, outside, drivetrain, and all parts. It was done on a rotisserie so the undercarriage looks just as detailed and finished as the top!! The car looks great and is a REAL attention getter!!   I have documentation from Galen Govier as to the authenticity and decoding of the car.  It has a one of 66 made Rim Blow steering wheel (see inset to the interior photo above). The previous owner added a correct 6 Pack setup and gave me the original 4 Barrel and intake. I plan on showing it occasionally and driving it around locally as well." 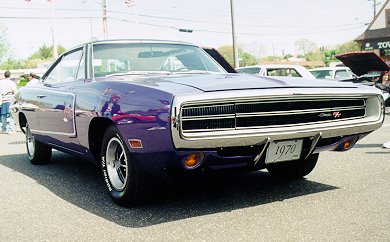 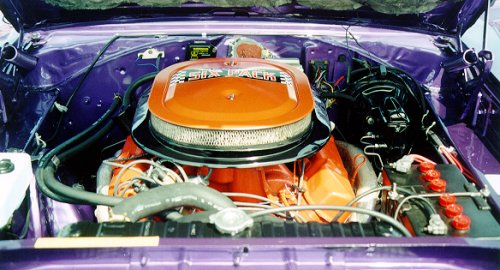 Check out some Peter's other fine MOPARs...