Hey, just visited your site. It's nice to see more people out there praising
the ideals of Mother Mopar. I've attached a photo of my brother's 65 Sport
Fury convertible. It has a little old 440 fed by a Weiand tunnel ram (two
Holley 750's). Our best E.T. to date is 13.38 (hazing the tires to the 1000'
mark). Once we get a handle on the suspension we believe we will be able to
break into the mid 12's. The car is an original Indy Pace Car edition but no
longer resembles the original factory issue. We think it's more fun to build
it up as a street racer and play with it than to sink thousands of dollars on
a trailer queen... 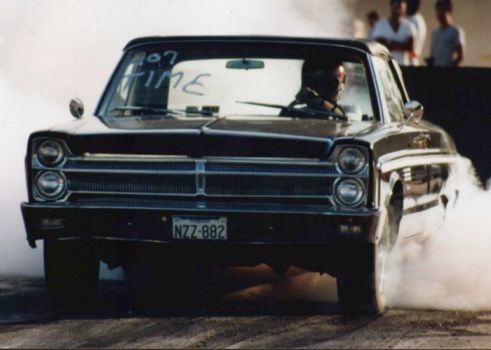 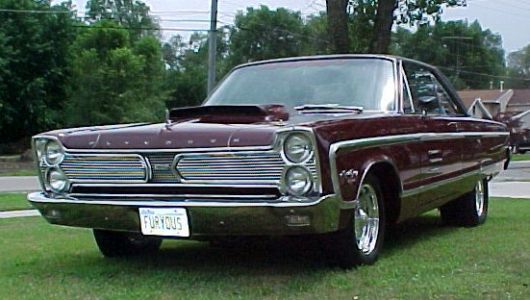 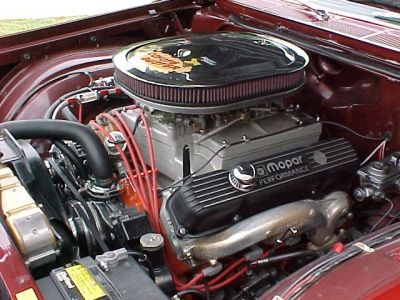 I found your web sight and thought that I would send you a few pictures of my Car. Let me know what you think. I am also looking for trim or emblem pieces as well as an factory am-fm radio for this year car if it was available. Mopar Collectors Guide did a feature on it over a year ago and they said it will be out before the summer is over.
I am not holding my breath. That was before the Hood, Wheels, and Dana60. I
guess I will just have to wait and see. Its a factory 4-speed 383, now with a
500 hp 440. Thanks again Rex Harrison of Braidwood, Il 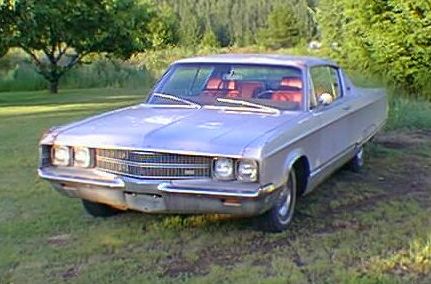 Hi, my name is Darrin, I'm a recent high school Graduate up here in BC,
Canada and I am the proud owner of two fairly classic MoPars. The first
car is a 1975 Plymouth Valiant Brougham 2 Door Hardtop. This car has
been in the family since brand new....My mom drove it off the showroom
floor and we even have old Super 8 Film (courtesy of my Uncle) of my Mom
and Dad arriving home in their first brand new car. Contrary to popular
belief, "Valerie" is not a slant 6 slug, she is equipped with a 318 with
a Carter 2 bbl and a 727 Automatic. Sometime in the late 70's, the
factory exhaust fell off, so my Dad replaced it front to back with a new
pair of exhaust pipes and put on what were known as "Blue Poly"
Mufflers....these mufflers produce the sweetest sound I've ever heard.
"Valerie" is equipped with every option except A/C and Sunroof (which
I'm told was NOT available with the vinyl top). Well, in 1990, my Mom
decided she wanted a new car, so she bought a 1 year old Chrysler
Dynasty and she didn't know quite what to do with "Val". My father (who
was not very fond of MoPar's in general) was about to send her away to
the car crusher. (This is where I step in) Being only 11 at the time, I
got the usual "Why does an 11 year old kid want a 20-some year old
car?".... Well, we made a deal....If I could come up with $400 dollars
by the end of Summer, I could keep "Valerie". I think that summer I must
have mowed every lawn in town, walked every dog and cleaned everyones
gutters....but I managed to come up with the $400 dollars. I'm sure I
was the only 11 year old kid in Canada to have a car in his own name.
Well, fast foreward a couple years, and I've been driving her ever since
I got my license.....racked up just a tick over 80,000 miles and I
thought it would be nice if I could make "Val" REALLY out-perform
everybody else's 5.0's and Camaro's. Well, next weekend, I've go a nice
set of 360 heads coming back from the shop, I found a nice 4bbl manifold
from a friend (5 bucks for it) and another friend gave me an 800 cfm
ThermoQuad. All this stuff is going to get bolted on next weekend and
we'll see how "Val" likes her new parts. :-)

My other car I came across back in High School. One day in shop class,
doing an oil change on "Valerie", my teacher walks up to me and tells me
he has a real surprise coming in on a truck today at lunch. (He's a Ford
lover, and he knows I love Mopar) Lunch being next, I decided to stick
around to see what was coming in. The truck arrived late (and I missed
Math class....don't tell my mom!) with the most beautiful machine I'd
ever seen. There she was, sitting on the back of a flat-deck truck, was
"Tessie", a 1968 Chrysler New Yorker 2 door Hardtop....still in most of
her original Silver Metallic Paint. I instantly fell in love. Of course,
my heart nearly broke when my shop teacher told me that the class was
going to make an abomination out of her....pull the 440 out and drop in
a GM 235 I-6 and make her into a Parade car!!! I nearly punched him out
right then and there! I asked why he wanted to do such a thing and he
told me that the 440 in her was seized. I didn't believe him. So I
pulled Valerie's Battery out, put it in Tessie and turned the
key.....the big old 440 slowly turned over....and didn't catch. Well, I
gave up, and put Valerie's battery back and the rest of the class pushed
Tessie out into the back lot. There she sat for nearly two years until
my senior year. During that time.....Tessie was defaced a
little....broken side mirror, broken antenna, flattened tires.....the
usual stuff disrespectful children do. Well, come my senior year, and
Tessie had not moved an inch. I couldn't stand to see such a glorious
machine sit and rot, so I took her under my wing and get her
moving.....I just knew she had the potential. (Body was solid, Interior
was spotless, odo only showed 94,000) Well, after investing nearly $500
dollars into her (New Ignition, Fuel Pump, Battery, Starter, replaced
600 Holley carb with 750 Holley, Belts, Plugs, Wires, Hoses, Tranny Kit,
Brake Shoes, Master Cylinder, Brake Lines.....etc.) I turned the key
about a month before grad and Tessie ROARED to life! Seeing that, my
shop teacher handed me all the papers he got with the car....turns
out....I'm only the 2nd owner....the first owner being the OLD principal
of my very high school!! Plans for Tessie include Dual Exhaust (which I
now have off of a very oddly equipped Newport), Pneumatic Trunk release
(off of that same Newport) AM/FM Thumbwheel radio, Quadraphonic
Underdash 8-track player (installed now), and If I can ever find one, an
air conditioning unit.....most canadian cars don't need A/C.....but I'd
like it anyway. And seeing as how I have dual exhaust, the 750 cfm
carb....I'm saving up to buy a camshaft with the same grind as the TNT
motors did.....so I can say that I basically have a TNT motor.
Eventually, I would like to paint her Jet Black....(this car is so big,
it has it's own congressman!) The one thing I truly love about driving
Tessie, is how safe you feel. Given, the lap belts won't really help in
any collision.....but you are surrounded by so much metal and chrome,
that Pontiac Sunfires and Honda Civics would disintegrate upon contact
with Tessie!

Whew, that was a lot longer than I thought it would be. I've also
enclosed some pics of "Tessie" and "Valerie".
If you want to put them up on your page, that would be great.....but
neither are restored yet.....both kind of "In Progress"

Thanks for taking the time to read my life story (basically)
Darrin.

"Ledsled" writes..."The "PAWMAW" wagon was specially constructed for the original owner "Maw Laurie".  I was able to purchase the car for a mere $500.00 from her heirs who didn't want the car.  It has a 383 Magnum and a four barrel.  With only 69,000 miles it cruises Southern California freeways in style.  Nothing can compare to the look in the kid in the lowered Honda's face as his rice burner gets smoked by the "PAWMAW" wagon." 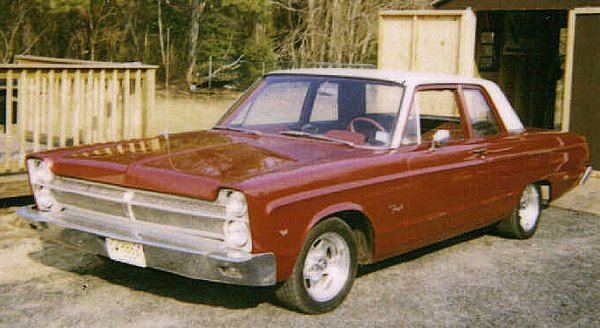 Paul Cohen writes about his rare and unusual 1965 Plymouth Fury II (above)...

"I am Paul Cohen from Southern New Jersey. I am about 20 minutes outside Atlantic City. I just came across your page. It is great! I thought I would drop you a few pictures of my 1965 Plymouth Fury II."

"I just picked up the car last month from a friend of mine. He was the
second owner of the car (makes me the third! DUH!!) He has had it for the past 5 years. He rebuilt the motor, and repainted the car, among other things. He has decided to let it go and still kicks himself every time he comes over. But he is glad it is close by! I am still learning about this
car. It seems parts are hard to come by and I see very very few of these cars around. It gets a lot of looks and I love that!"

"According to him the car was a Nabisco Company car. The car was kept by the guy who had it and then garaged for a long time and was a grocery go getter. He picked it up and did his thing. Now it is my pride and joy!
It still needs some love to be perfect. I want to replace the carpet.
It is in good shape but there is one hole on the drivers side that is small.
I need to have the seats recovered. I am also looking for an upholstery kit.  I may give up and take it to the local shop and just have it done. It was  cut open for a DIN radio. I am getting a new dash bezel and I am gonna put it back to stock. Or at least a stock look. I am gonna probably put in a Custom AutoSound Radio. They make modern radios that look like old radios."

"I just found a new horn ring. The original has broken. And I am putting new brakes on it now.  Gotta be able to stop!!!! And I want to replace front and rear bumpers so they are PERFECT!!! And some bracket that holds the air cleaner to the carb is missing so it kind of floats around. I think I finally found one though. But it is a blast to take out for a drive!!!"

"Anyone who has info on the car can email me at PKCohen1@aol.com
Suggestions and ideas are always welcome. Among things I want to do are
have the tranny rebuilt. Not even sure what tranny is in it yet...It is
automatic with no overdrive. I need to find a place to get PERFECT bumpers.  And I have heard that in the 70's there was a company that made an intake so I could bolt on a 4 barrel Carb. I would love to find one of those. I am also going to have a dual exhaust put on it."

"Anyway I have babbled on enough. I will send some pictures along. Great
page. And if you know of any MOPAR clubs down this way let me know."

"Oh yeah - It has centerline rims with BFG's on it but I have the stock
wheels!!!! He even left me another block and tranny he pulled from a junk
yard."