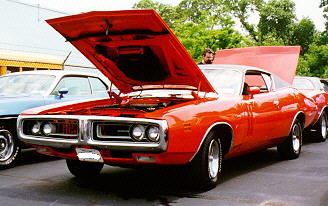 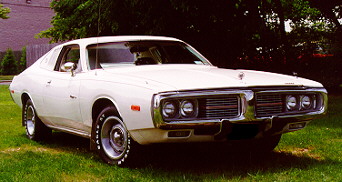 John's latest toy is the '74 Dodge Charger Rallye shown above. It's 1 of 213 equipped with the 440 cubic inch "Magnum" V8 and automatic transmission.  It's also equipped with power steering, power brakes, and an 8 3/4" rear with 3.55:1 gears.  It was built in August of 1973, making it one of the first '74 Chargers built.  Note the lack of a stripe in the photo on the left.   It was left off after initial restoration and added recently. 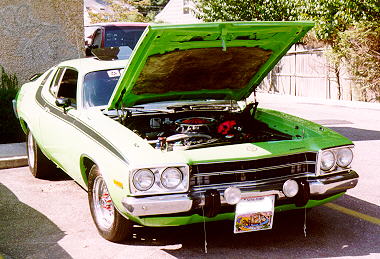 Above is Mike H's 1974 Plymouth Satellite Station Wagon equipped with a 360 cubic inch engine with four barrel carburetor, automatic transmission, power steering and disc brakes, and factory air conditioning).  The car was purchased from the proverbial "little old lady" by Steve K. (check out his '63 Plymouth Savoy).  Since he had no particular use for it, he used it as a "storage shed" for some of his car part collection.   When Mike suddenly found himself in need of a wagon, Steve sold it to him.  At the time of purchase it had a mere 17,000 miles on the odometer.  It required only a tune-up, oil change, and new tires to be road-worthy after years of non-use.  It's now his daily driver.  Check out Mike's 1970 Plymouth Superbird.